Launch of the Test-Net and a short Tutorial

Architecture, Decentralized Processing Threads, and.. Fake It Till you make it!😆

Head of the GRIDNET Project on the Taskbar

GridScript Basics and Micropayments – From the User’s Perspective

Log-in to GRIDNET OS. The Old Wizard got hacked (not!😄)

Transactions from the mobile app are here!

Currently the node operates in mode which allows for testing of Terminal Services. Blockchain formation mechanics have been disabled (both data-blocks and key-blocks). That is on purpose since we want to be steadily opening up while testing the parts being made available.

That in practice showed as an extremely good decision as we’ve already been heavily DOSed on the SSH protocol level which made us improve the LibSSH implementation to increase resilience against attacks. There’ll be more on that in a seperate post as it’s quite an interesting topic.

Here’s what everyone been waiting for. SSH access details:

GRIDNET-OS’ commands are Linux-compatible by large thus you may feel at home. A tutorial and a more comprehensive documentation regarding that is pending as part of the Whitepaper.

For now let me say that to access you may use a program such as Putty if you are on Windows and input the access details provided above. Sample configuration below for your convenience: 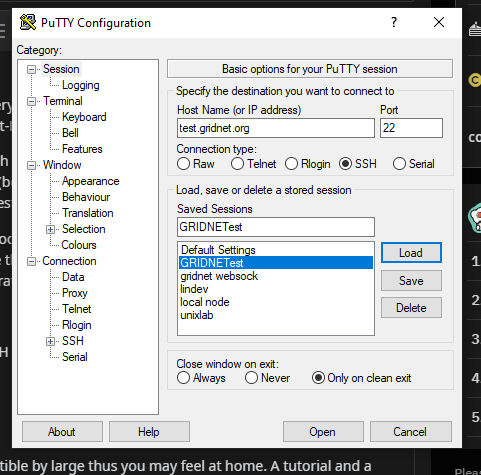 within console and you’ll be instantly greeting with an in-terminal GRIDNET-OS loading screen.

Important: When using putty quickly hit Enter as soon as the Login: field appears at the upper corner, otherwise the connection would drop and you would be insta-banned after just a few attempts for 30 minutes. 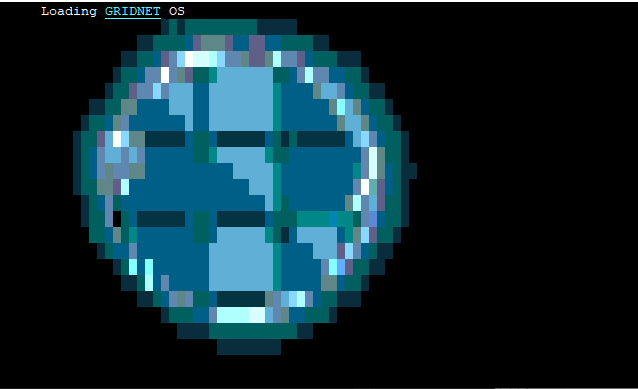 Can you believe that this colorful animation is happening right within an ASCII-based terminal interface? Pretty cool.

A moment later you are presented with the initial Shell View: 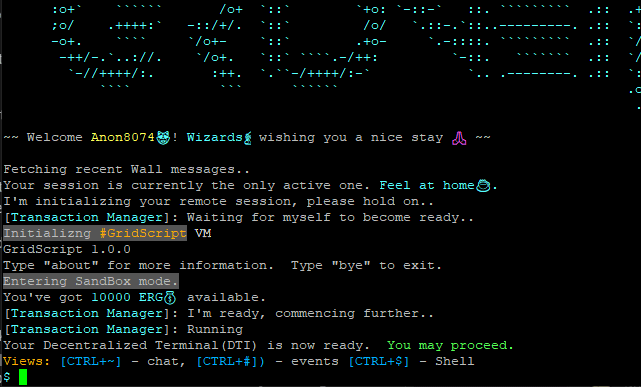 Initial screen within the Shell View.

You may change views as per the depicted CTRL+KEY combinations above.

CodesInChaos has updated you on what’s been going on recently. Expect more information in regard to attacks we’ve been facing recently while bootstrapping the Terminal Services.

Oh! And while in GRIDNET-OS terminal don’t forget to switch to the Chat View (by pressing CTRL+ ~) – on some system two times.

In days to come we’ll be working on making the mobile authentication app available to you (for now for Android users as the bootstrap process is much simpler, though remember that the app is easily portable to iOS since it’s been implemented with QT). We’ll be also steadily enabling block formation mechanics allowing you to modify the state of the decentralized state-machine. Right now you can create directories files assign access rights (‘mkdir’ commands, ‘touch’ , ‘cat’ , ‘less’, ‘tail’ ) etc. After each such change observe how your Gas/Erg evaporates by typing ‘ergleft’. You may also see how the footprint of the uppermost Merkle-Patricia-Tree keeps changing by typing ‘perspective’ anytime.

How to move around within the Terminal? let me give you a quick guide: 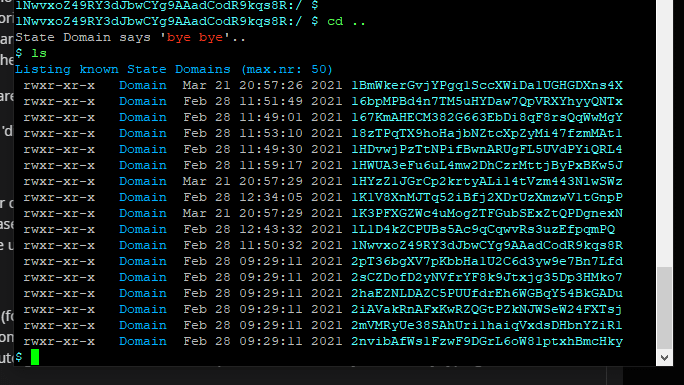 Figure 3: List of accounts currently registered within the system.

2) Now ‘cd‘ (for change directory) into a State-Domain (which sort of an account, with identifier generated based on public key, worry not you may registered a friendly-looking identifier that would replace those ugly looking random characters). Just pick one of the above and type for instance 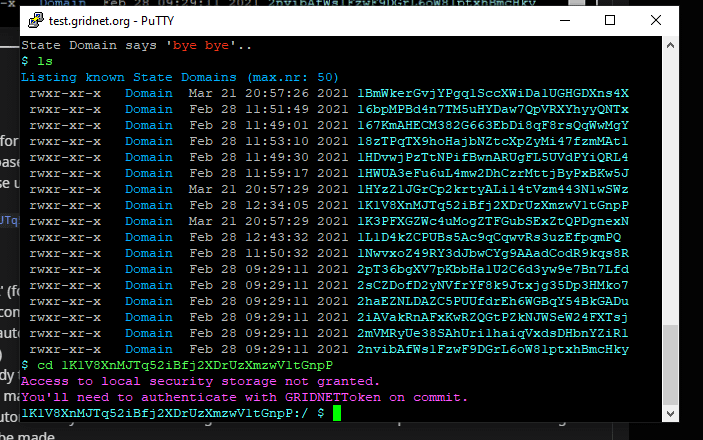 Figure 4: We’ve entered a State-Domain for the very first time!

3) Now you may use ‘ls‘ to list its contents 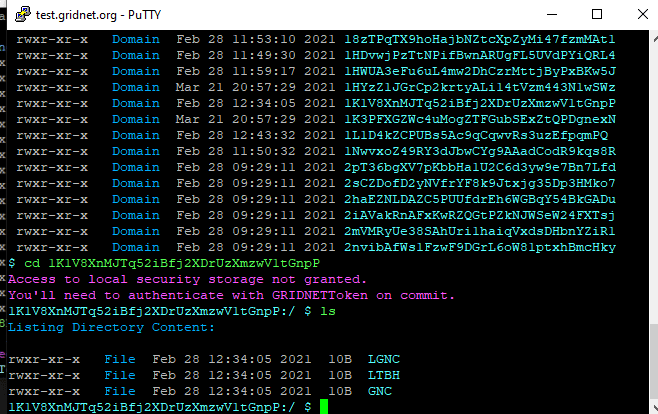 Figure 5: Contents of a sample State-Domain

As you may see there are three files within. These are special files containing information related to holder’s GRIDNET Coin balance, and the amount of frozen assets. You may type

to view the current balance. The values stored by GRIDNET-OS are strictly typed meaning the value will be interpreted as an unsigned number shown and put onto the stack immediately. These are some advanced topic we won’t be getting into these for now. I shall just say that you may view the stack’s contents anytime by typing ‘.s’ 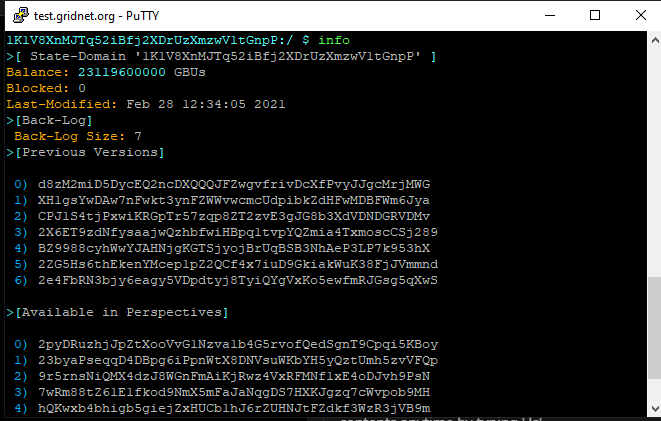 Now you may try creating files and directories.

To create a directory use ‘mkdir’ command (now how familiar is that!) 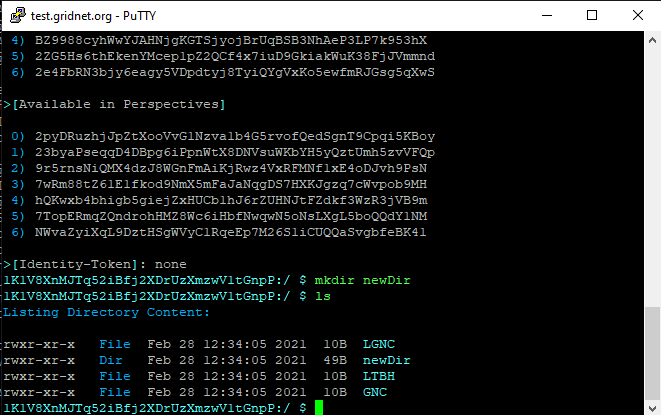 we may enter the directory simply by using the ‘cd’ command we are already well familiar with. 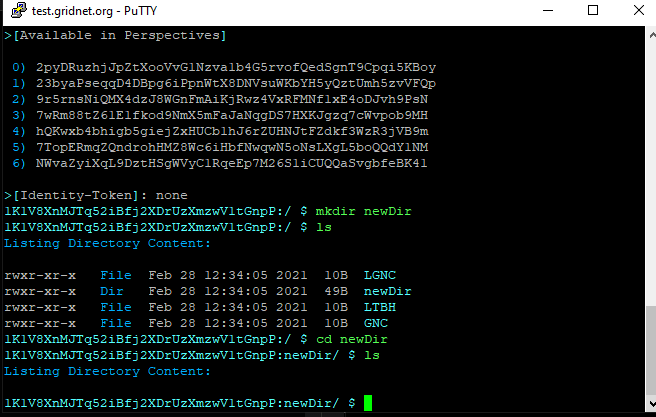 As you may see above the just created directory is empty.

Lets create a file inside!

Why don’t we use a Linux-compatible ‘cat’ command.

cat "contents of my file" > file.txt 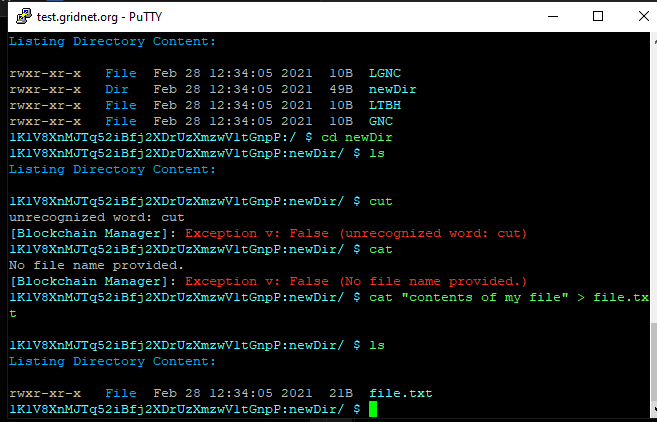 and here it is! Your very first file on the very first 100% decentralized operating system!

Why don’t we view its contents?

you may use a Linux-compatible ‘less‘ command to achieve just that. 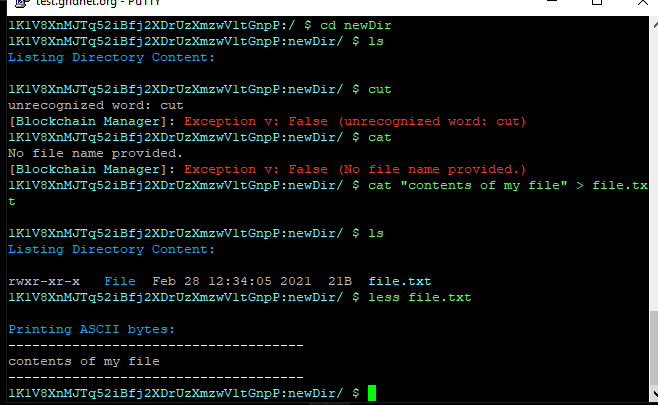 Commands oftentimes support optional parameters. Use ‘ls file.txt -b’ to interpret content as binary and automatically shows its base58- representation.

Let’s cut it here for now and see how we can create a transaction. For now we’ve been operating in Sandbox mode. The full-node has been serving us the Decentralized Service while we could perform arbitrary commands but none of these really affected the Decentralized VM.

In order to affect the VM we need to prepare a ‘Transaction’. In short the workflow is as follows: 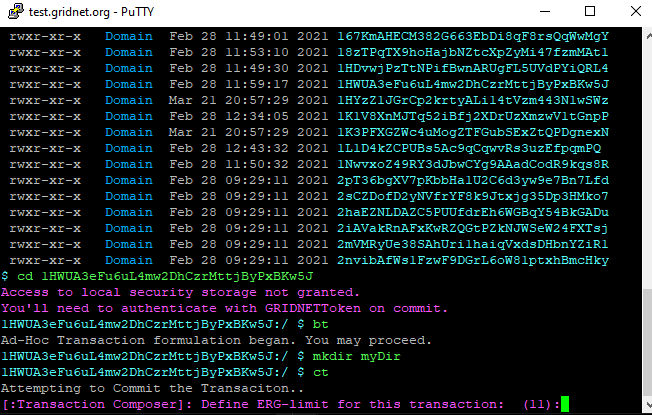 Figure 11: Preparing a transaction instructing the Decentralized VM to create a directory within one of the State-Domains.

At the end you’ll be presented with a QR-Code directly within the Terminal. We call such a QR-Code a QR-Intent. Such an intent contains all the information the GRIDNEToken mobile app needs to get in touch with a full-node to deliver the required credentials to be broadcast throughout the the entire network. No further interaction is needed. You may check status by typing the ‘getresult‘ command. 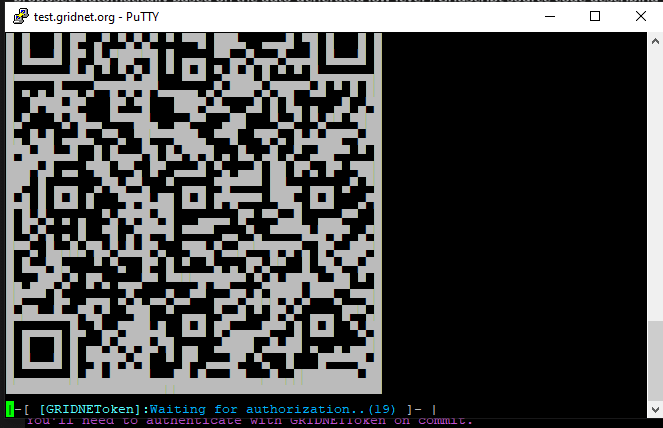 Hold on , but you haven’t got access to the GRIDNEToken mobile app yet, right? 🤭 That’s what we’re working on right now! Spread the information keep sharing it, our Wizards have been working real hard to deliver you with unprecedented levels of decentralized possibilities.

One more thing ~how to make ultra-fast cryptocurrency transaction~?

Pick the recipient and simply ‘cd‘ into another account you would have owned, was it yours and use the ‘send‘ command: 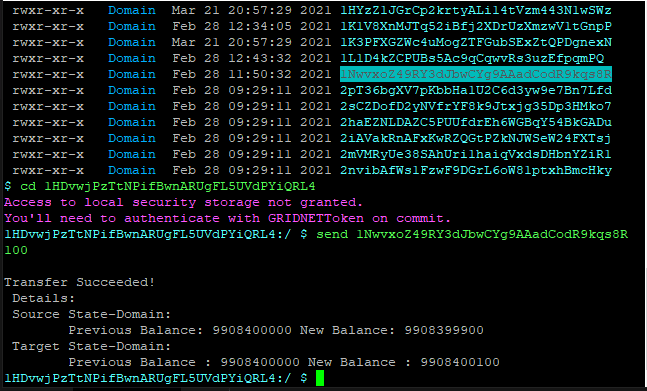 Figure 13: A Cryptocurrency transfer issued within the Terminal..

Now how wonderful is that? Was it quick? It won’t be much slower once we fire up block-formation 😆

Launch of the GRIDNET OS Magazine