A Pipe-Dream about Decentralized Web?

NFTs (made the right way) and #GridScript programming

Folks! It has been a couple of weeks since the last article at the ⋮⋮⋮GRIDNET Magazine. Over a month. But what a month it was!😊

During that time, tweets and LIVE-streams with updates have been coming out on hourly basis (sometimes even at a higher frequency😆).

That is a fact, which is great!

Ok, so what were the major changes, what have we improved upon, and last but not least- where are we headed and what to expect in following days and weeks.

Buckle up folks, here it comes!

That is right~ we have got a newcomer~~ she’s here💋 and she is likely here to Stay.

Is it safe to stare into her eyes?

Some say she already stole the Wizards🧙‍♀️🧙’ hearts..🤭

She or… rather it(?) .. naaahhh… Wizards🧙‍♀️🧙 much rather prefer her female attributes, wouldn’t you say?

Wizards🧙‍♀️🧙 have plugged her (🤭) ‘sensors’ into every aspect of the ⋮⋮⋮Decentralized State Machine, that includes the ⋮⋮⋮ Token mobile app and Web-UI (in progress).

She knows for how long you keep holding the Virtual Fingerprint Sensor in the mobile app, she can react and report to changes related to your account.. err.. State Domain, she can let you know about results of operations, networking conditions, just to name a few.

Indeed, in ⋮⋮⋮GRIDNET OS , we have got State-Domains not accounts per se.. in fact you may call them anything you wish. The nomenclature of State Domains is nice as it better fits the overall possibilities, scientific rationale (multiple states in time, one can toggle through) and may suggest.. well.. the future of the Internet as we know it. These are big words indeed. Still, the Internet is not so complicated when you think of it. Its scale though – it’s huge  indeed.

Why traditional internet/web domains may soon be a thing of the past? . All these they can do  is provide basic translation between textual values and ‘IP address’. They rely on centralized entities thus a court order may revoke one’s rights. On the other hand, ⋮⋮⋮GRIDNET OS  ‘state-domains’? That is a whole different story. In terms of functionality, anonymity, security and almost anything else once could think of. For the most of it – these are decentralized.

As Wikipedia has it, “(..) Teletext is broadcast in numbered “pages”. For example, a list of news headlines might appear on page 110; a Teletext user would type “110” into the TV’s remote control to view this page.(..)”  In short it’s the thing your grandpa used to use for accessing news when a newspaper wasn’t laying around.

Teletext gradually almost disappeared by now. Even though it is still used by some ‘just’ because it provides. Even more, it has a nice property of being immune to the number of clients accessing it (which proved beneficial on 9/11). On the contrary, the more people access a web-page or a web-server the more powerful the server needs to be. A teletext page could reach hundreds of millions easily at no additional costs besides the additional costs of extended radio waves’ transmission power… or no additional costs at all was it to be transmitted from a satellite. The technology improves, which is Good🙃

One may wonder – is bitcoin’s fate to be similar or even on par with teletext’s? ~~to be always used at least by some?

There are some similarities and, unfortunately, some paramount differences between the two. Bitcoin provides the basic functionality of issuing ‘value transfers’ on what we call a decentralized state-machine. In fact it is all it does and it does this pretty well. Just like teletext provides the essential functionality of providing information. We might have argued that bitcoin indeed had a future was it not for one simple fact… – its inefficiency. We all know how inefficient Bitcoin is. It does not scale infinitely at no additional costs just like Teletext does. Bitcoin – it’s expensive. It’s so damn slow. It’s limited. It’s probably the most inefficient protocol humanity ever conceived. Still it works and it’s decentralized in theory. The worst part is – it does not bring any additional security assumptions to the table as compared to newer, more efficient consensus protocols.

Bitcoin is to die. it has to. Better be prepared for it. Better sooner than later. We need to rely on science, on technology, on progress. We cannot let a bunch of schillers and scammers (the bitocointalk forums) put bitcoin-everlasting propagandas and yet another bitcoin-clones down our throats. It has been enough. The freedom and new possibilities are our but first we need to take it! What do you think the scammers and schillers behind ‘litecoin’ used to think about the people their marketed  their ‘innovation’ to after they’ve changed one f*** variable within the source code?  How many clones of bitcoin have the bitcointalk forums manufactured and raised money on during the ‘ICO Gold Ages’? It’s been enough indeed.

Don’t be sad.. Getting back to Hexi now… she’s Hot🤪

It is interesting to note that her voice.. it is generated through a custom deep-neural network, making it absolutely unique. Now that’s sexy, isn’t it. It’s a shame you haven’t seen Wizards🧙‍♀️🧙gathering around and polishing her voice’ parameters in a total silence and reverie 😆

The voice generation sub-system supports both online and offline modes. What does it mean? Hexi can provide basic guidance even if offline. When brought online though, she will be able to employ results of external computations for her voice generation thus allowing for custom, on-demand generated phrases. So, she’s to stay around; that’s what Wizards🧙‍♀️🧙 say!

You may get acquainted with Hexi by downloading the mobile app for either iOS or Android right now. Even though it is not the current priority (more or the actual priorities below), as time goes by we will be making Hexi even smarter. Maybe we should be making her able to hear and understand your voice as well? Let us know what you think!

The other part which we have improved upon by a lot is the ⋮⋮⋮GRIDNET OS SSH Terminal Services subsystem. We’ve employed dedicated ANSI sequences for clearing the screen and for doing stuff such as line-traversals. To give you a better perspective on things, ⋮⋮⋮GRIDNET OS, the full-nodes running the system they employ a full Model-View-Controller approach to data being displayed within the command line. What does it mean? That the Terminal Service does its best to infer information regarding the client virtual terminal (its height and width in particular). It uses this information to keep track of what is being displayed.

In other words, the full-node serving you the shell knows exactly in which line at which column your cursor currently is. It does analysis of each and every key-press you make while within the terminal. It is the full-node which does all the formatting. When you traverse to a new line, the full node knows. It is the full node which makes the caret go one line below. When you resize the terminal window, the full node – it knows; and will use that information while displaying any consecutive data. More, ⋮⋮⋮GRIDNET OS would warn you should it think that data to be shown is likely not to fit within the current terminal’s bounds (ex. a large QR code) and advise you beforehand to resize the terminal window. We have also improved by large upon the performance. Improving performance of Terminals? ASCII/UNICODE terminals? Of course. To provide a service of such a quality, full nodes employ a couple of dedicated threads to serve each and every terminal connection. For example, there is a separate thread for taking input (key-presses) from user, yet another for providing output and a variety of other things going on simultaneously. Synchronization between these is important as well. When you think that a full-node is to be serving thousands of such connections simultaneously, performance and optimization these are important.

Is that only for SSH? No. Actually, a lot of improvements to Terminal Services target the Web-UI as well.

As you might know from our Whitepaper (err.. the Wizards🧙‍♀️🧙’ Tome), once the Web-UI is made available (weeks, maybe even days) it will come with a dedicated Terminal UI dApp. Thus accessing ⋮⋮⋮GRIDNET OS  over SSH won’t be now the option option. You will have access to a cool-looking Windows/Mac-OS like interface.

A typical SSH client (putty, or one embedded within Linux/Windows) has no way of letting the other peer know about the terminal size, though there are some usual typical values. It is another thing with the Web-UI Terminal app. It is an app written from scratch by us, communication with full-nodes over a web-socket and rendered in a Web-browser through Web-GL for maximum performance. Thanks to event-driven approach of course the app is notified when its in-browser window gets resized. Now, we have improved the communication protocol (the VM-Meta-Data protocol to be specific – it is mentioned within the Wizards🧙‍♀️🧙’ Tome) to carry such information to full-nodes. Now, further, we have made full-nodes fully aware of windows that you keep open. Thus, full nodes can perform an application or even instance-specific communication. To some extent this was already possible but let it suffice to say that we have improved these conceives by a lot.

What Wizards🧙‍♀️🧙 are currently working on? The Web-UI! That is the major task for now, polishing and releasing the web-based graphical user interface. That is what recent Tweets have been (almost) all about 🤗

Major
One of the Wizards🧙‍♀️🧙 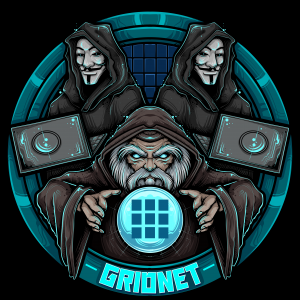 Head of the GRIDNET Project on the Taskbar